Think of hot-button issues of our day. Things like the Corona virus, protests for racial justice, and immigration. These are topics that everybody seems to be talking about.

For the Jewish people in Jesus’ day, they were discussing and debating the hot-button imperial tax. Was it right for a country to demand taxes from those in a land it was occupying? Many in Judea said no. Some even tried to start a revolution over it.

When Jesus was a boy there was a man named Judas who led an uprising because of this very issue. “The Romans had crushed it mercilessly, leaving crosses around the countryside, with dead and dying revolutionaries on them, as a warning that paying the tax was compulsory, not optional.”[1]

The Pharisees were hoping that engaging Jesus on such a high-stakes, political topic could discredit him, or even bring about his death.

17 Tell us then, what is your opinion? Is it right to pay the imperial tax  to Caesar or not?”

18 But Jesus, knowing their evil intent, said, “You hypocrites, why are you trying to trap me? 19 Show me the coin used for paying the tax.” They brought him a denarius, 20 and he asked them, “Whose image is this? And whose inscription?”

Then he said to them, “So give back to Caesar what is Caesar’s, and to God what is God’s.”

What do you think Jesus meant when he said, “give back to Caesar what is Caesar’s?”

So far this week, we’ve considered the motives of the Pharisees. Today, let’s imagine what the crowds who were following Jesus might have thought about this exchange as we consider what it means to “render unto Caesar what is Caesar’s.”

According to John’s Gospel, not long before Jesus enters Jerusalem and is hailed as a king, he performed the most extraordinary miracle — he raised Lazarus from the dead. For three years Jesus had done miraculous things — he’d fed crowds, calmed storms, healed the sick, and restored the injured. Jesus had also shown tremendous compassion to those on the margins of society. He’d openly challenged the powerful, the wealthy, and the religious elite. He affirmed the dignity and worth of all people. He’d also taught about his coming kingdom.

With all this in mind, what do you think those watching this exchange expected Jesus’ answer to be? They’d heralded Jesus as their king. They were anxious for the restoration of Israel as a land of prosperity, goodness, and justice. In their excitement, it might have been easy to dismiss some of the difficult or challenging things that Jesus had said about his death. It’s not hard to imagine the crowd waiting for Jesus to denounce Caesar and his wretched taxes. Let the revolution begin!

Like the crowd, we can sometimes have high expectations for our leaders, particularly political ones. We can look to them to solve society’s problems, bring us prosperity, and generally make our lives better. Those aren’t bad things to want, but we need to be wary of those who promise beyond their ability or position. Unlike Jesus, no human political leader has the power to save the world.

Jesus could have done what the crowd wanted. He could have commanded a battalion of angels to evict the Romans and bring the nation of Israel to such glory that King David would have been amazed. But Jesus often zigs when we expect him to zag. His agenda is frequently different from our own. But it’s always better.

In due time, Jesus will bring heaven and earth together for all time and we will experience the fullness of his reign. Justice will “roll down like waters, and righteousness like an ever-flowing stream” (Amos 5:24). All people will flourish and prosper. And while Christians are empowered by the Holy Spirit to work towards those ends right now to better the lives of those around us, we won’t ever create heaven on earth. No human government will either. Sin dominates this world, but it’s dominion is limited and temporary, and the clock is ticking down.

Part of understanding what it means “to give back to Caesar what is Caesar’s” is recognizing the temporary nature of our current circumstance. As James reminds us, we “are a mist that appears for a little while and then vanishes” and so are the governments that preside over us. We should give them what they’re rightfully due, but no more.

Jesus isn’t making an all-inclusive, definitive statement on the relationship between his followers and their governments. But if we’re going to extrapolate from what Jesus says based on the rest of scripture, we could say something like this: as citizens of our nation, we should pay our taxes, pray for our leaders, obey our laws, and strive to live at peace with those around us.

When we have the right to vote and advocate in a democracy, we should engage in the political process in ways that honor Jesus, including obeying the greatest commandments (which Jesus defines just a little later in the chapter we’re studying). He says we are to love God with all our heart, souls, and minds, and to love our neighbors as ourselves (Matthew 22:37–39). As citizens, we demand just laws and fair treatment for all people, because they are God’s image bearers, and because that’s what we want for ourselves.

As we will see in the coming weeks, human governments are instituted by God to keep order and restrain evil. Those of us who live in democracies have influence over those governments. Yet, we must keep our expectations of political leadership in check, because no human institution can save us, only Jesus can. Our truest and most fervent allegiance belongs to him.

About the Engage God DailY

Jesus invites us to know him personally and engage with him daily. Through daily Bible reading and prayer, we can grow in our relationship with him. The Engage God Daily is a daily resource designed to help you better understand the Bible and take you deeper into the concepts taught on Sunday mornings.

Use this guide to prepare for next Sunday’s teaching. Each day presents a reading, Scripture, and a prayer to help grow in your walk with Christ this week.

Get the Engage God Daily delivered straight to your inbox every weekday morning before you wake up! 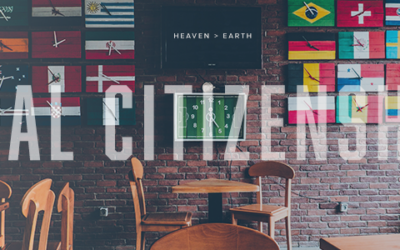 Lisa Sheffler, author It’s Friday! Let’s take some time to celebrate the reign of King Jesus, spend with our Father, and invite the Spirit to transform us. Reflect What is your biggest takeaway from Romans 13:1–7? How would you apply this passage to your current...

Lisa Sheffler, author This week we’re considering one of the New Testament’s seminal passages on Christians and government, Romans 13:1–7. On its surface, this is should be a fairly easy passage to understand: Submit to your government and obey your leaders because...

Lisa Sheffler, author From classics like Lord of the Flies to dystopian movies like Mad Max or The Purge, artists have imagined what life would be like if societal order completely broke down. It’s never pretty. Anarchy inevitably results in injustice, violence, and...